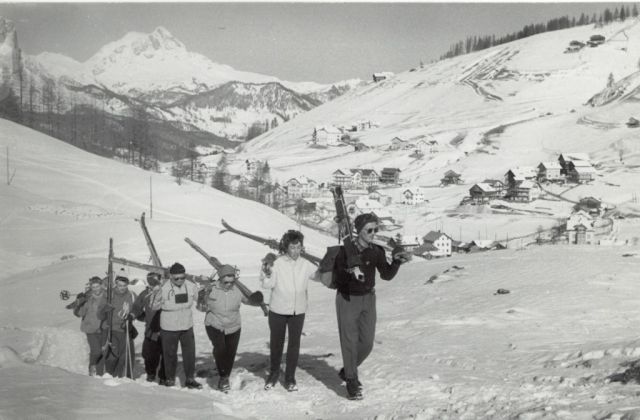 Skiing is our passion since 1954

Once upon a time…
… there was a beautiful valley in the Dolomites were skiing was wonderful. Bun in the 1940s no streets getting into the Val Badia. The few guests that were able to reach the villages were brought there by sleights drawn by horses.

The first pupils
In 1950 a group of nuns stayed at the Hotel Rosa Alpina and wanted to learn how to ski. Alessandro Canins was an excellent skier, but he never held a ski lesson before. What should he do? He took a book, studied the theory and gave his firs lesson.

The founding of the Ski School
In 1954 the Ski School San Cassiano was founded by Canins Alessandro and some of his ski- enthusiastic colleagues. At the time they had no office, so they had to go from hotel to hotel to find students. Adventurous tours in the mountains (Armentarola Padon, Fedaia and Marmolada) were very beloved already.

The fist office
In 1961 the chair-ski-lifts Biock and Ciampai started operating. Exactly there, the first “office” was opened. You could now book your ski lessons and get your lift ticket directly on the slopes, so you were ready to roll.

Step by step forward
Between the years 1972 and 1978 the number of guests that came to Alta Badia increased (Record: 330 pupils in the adult group lesson in one week). The number of ski instructors got higher too, and the Ski School San Cassiano had to move to a bigger office. The new director was Franz Thaler, who introduced the different skiing levels and the final race at the end of the group lessons.

A lot of changes
From 1986 to 2006 Luigi Glira was director of our Ski School. The number of German guests decreased but more and more Italians came to Alta Badia. New disciplines like Carving, Telemark and Snowboard were introduced. Also, a new office on top of Piz Sorega was opened and the little ski ground with the conveyor belt was build.

Steady Successes
In 2006 Stefan Adang became director, followed in 2009 by Pescollderungg Albert. The main office was transferred next to the Piz Sorega parking spaces.

In the future
A lot of things changed, but one thing stayed the same: our passion for skiing and snowboarding that we try to pass on every day. That’s why every year we can’t wait for winter to come so that we can life exiting new adventures with you, our guests. 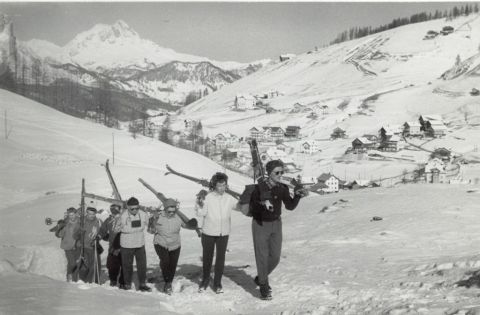